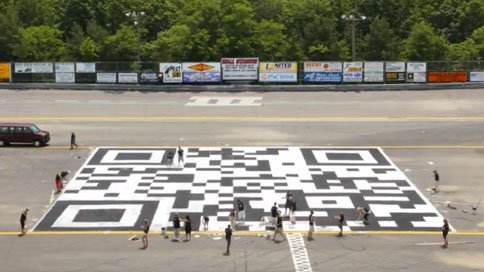 Many (including me) have been setting them to the side, – ” QRs are ugly” – “they’re a fad” – “I just throw it at the bottom of the page” –  but this perspective may be changing.  I recently have seen a shift toward greater interest and adoption of QRs and wanted to find out about some best practices. In the process, I have gathered a few resources that I thought I would share.
I will start out by saying that QR stands for Quick Response, and considering the global attention deficit disorder we all seem to be developing for content – QRs may make more sense than we are currently giving them credit.
File Formats

PNG,  TIFF,  JPEG,  GIF,  XAML,  SVG,  EPS
You can create a QR code in various formats, but that can be a good and a bad thing – considering scaling of pixel data can become an issue.  In fact, if there is one definitive science in QR codes it is readability – if your QR code reader can’t read your QR – well then – it ain’t workin’. Pretty simple! I suggest trying a few readers to verify accuracy and readability.  Personally, EPS is always nice to have (even if it is a backup) and/or in addition to a jpg, png or other. Vector = scalability.

When creating a QR code in a pixel based format (other than eps) be certain you have generated your QR code at the size you need.  Keep in mind, the concern here, is that if at any time (now) or in the future, your QR code is re-sized and re-used, quality degradation occurs, and readability could be compromised.
EPS is scalable without this issue.

QR code generators create a series of pixels based on the url. And the more complicated the URL, the more complex the QR graphic appears. Shortening the url with Bit.ly, TinyURL or similar will simplify the design.

Showing a QR code in a proper size is a must, too small just can’t be read… but also be certain there is ample clear/white space around the code, or it will be difficult, if not impossible to scan.

Creative QR codes were inevitable. Since their inception, QR codes look and feel like a bar code and with that designers were inspired to make them more interesting. Considerations are in the mix of this dialogue

If you don’t have time – and just want to know the basics – watch this.
Three simple considerations about QR’s
QR Code Generators Online
Considering the variables above and depending on your specific needs, this is one of the preferred QR Code Generators.
http://keremerkan.net/qr-code-and-2d-code-generator/
How and why to use them.

I recently read an article about how we as users and consumers are becoming ever more demanding of the use of our time and with that in mind, QRs will need to deliver some added value to the experience. Simply directly the user to a static web site will not be enough. Be Qreative – sorry – had to.

Curationg of QR
And here is a link to some (unusual) QRs
http://bigfishmedia.ca/qr-codes/unusual-qr-codes.html