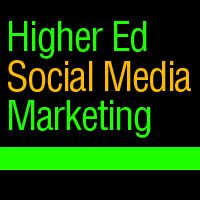 The growing importance of the Web in the evaluation process appears to have increased the potential of a negative Web experience to impact a student’s evaluation of a campus, even for schools at the top of a student’s list. When students have difficulty finding information on the Web site of a campus they are highly interested in attending, 47 percent said that the negative Web experience would diminish their opinion of the school. That number rose to 65 percent for campuses they had some interest in attending, and 70 percent for campuses recommended by someone – with one in five students saying a negative experience would severely harm their opinion in these latter two cases.”