I generally stay away from two things in large scale conversation. Religion and Politics.

Meaning I only have these discussions usually just with people who I know quite well and our differences in opinion on the subject matter doesn’t jeopardize the relationship or friendship we have.
But with the recent visit from President Obama to Facebook and then to Los Angeles (where I am) I was intrigued to hear and see some of the dialogue, so much so that while on-line… I clicked from one site to another and ended up at BarackObama.com… which simply asked one question.
ARE YOU IN? 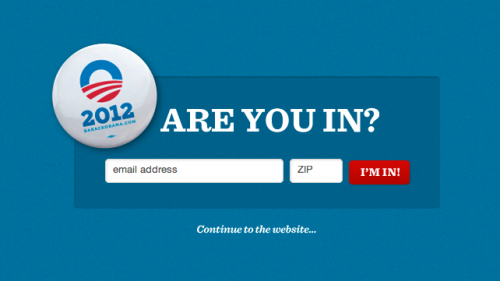 Without getting into my personal political leanings, or who I voted for in the past 20 years or who I will vote for in the next… I asked myself… well AM I IN?
Couple things came to  mind.

What if I’m not?
Who else is “IN”?
If I say I’m in… have I just committed to something that I wish I wouldn’t have.
The questions continued… and I exited the site.
You can opt to click thru by simply hitting the small italic type underneath that reads “Continue to the website…
But see our on-line experience is more that a web-site.
It was a web-site 3-4 years ago perhaps when the 2008 Presidential campaign was taking place.
But our User Experience expectations, our on-line appetite and internet savvy has evolved.

Mr Obama was the first Presidential candidate to utilize social media… really the first one who had access to it to the degree that it became available and it appears he is going after a social media run for pres in 2012 in a similar fassion.

But is this entrance into the site… working? Is it inviting? Is it what he should be asking? Is it a turn-off?

If the country were humming along with record low unemployment.
With honest Wall Street back on track and some who were serving time for wrong doings.
With gas prices at a reasonable place.
With the educational system on a solid trajectory.
With the conflict we’ve been involved with coming to some conclusions.
With Washington insiders that are no-longer insiders on both the left and right.
If all of this were better than the American people believe it to be currently…

Well then maybe “ARE YOU IN?” would be a good question to ask.  Yes, you might be “IN” then – perhaps most would say they are “IN”.
But I was watching CNN and they cited a recent NY Times CBS Poll and what it indicated… hmm the stats don’t look good… and the use of social media in his 2008 run, though very successful, may not work going forward. START AT PAGE 12 “President Obama and the Economy” and you may thing that the BarackObama.com site may want to re-think their home page.
For me, I am kinda bitter about politicians on both sides of the aisle… so I’ll just recommend the UX consideration.
Cheers,
John